Seeing as we’re eight months away from the next National Signing Day — and seeing as how we’re knee-deep in the annual dearth of offseason college football news in the month of June — let’s take a quick peek at some recruiting rankings, shall we?

While fully aware that things can and likely will change throughout Nos. 1-113 between now and next February, Florida State currently sits atop 247Sports.com‘s rankings with composite rating points totaling 255.09.  Of the Seminoles’ 17 total verbal commitments at the moment, three are considered five-star recruits while another eight are four-stars.

Not far behind FSU is defending College Football Playoff champion Ohio State with 253.48 points, with the Buckeyes’ 16 verbals consisting of a whopping 12 four-stars but “just” one five-star in the group.  The gap between OSU and the next group is significant as Miami (242.62), Georgia (232.6) and LSU (222.32) round out the recruiting website’s early Top Five.

Indiana is currently the lowest-rated P5 program at 105th out of the 113 teams listed.  Colorado, at No. 100, is the only other member of a Power conference in the 100s.

2015 Rivals.com recruiting kings USC currently sit at No. 14.  Alabama, which had won four straight recruiting titles before being knocked off this year, is inside the Top 10 at No. 8. 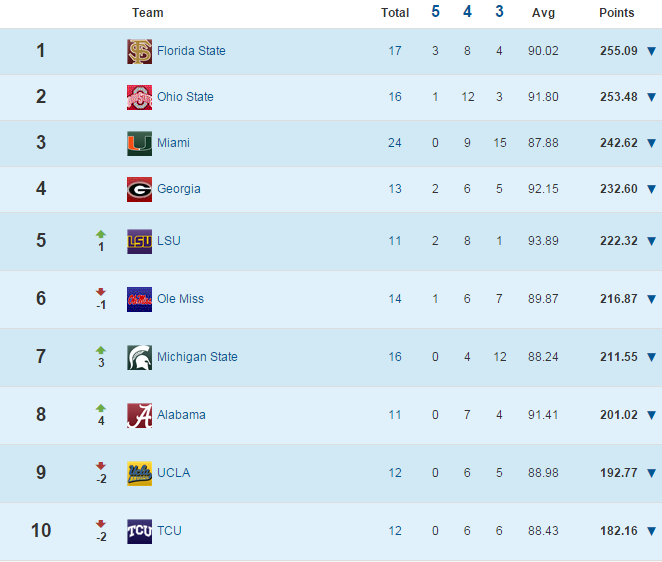