One of the talking points in the months leading up to the upcoming season is that 2015 could be The Year of the Quarterback in the ACC.  The Manning Award seems to agree… somewhat.

In becoming the latest, but not the last, to do as much, the Manning Award released its preseason watch list, with 30 quarterbacks from all 10 FBS conferences all represented on in this initial group.  Headlining that group of 30 are three finalists for the 2014 award that was won by Oregon’s Marcus Mariota: Trevone Boykin of TCU, Cody Kessler of USC and Dak Prescott of Mississippi State.

The ACC leads all conferences with five quarterbacks on the list, although that league is followed closely by the AAC, Pac-12 and SEC with four apiece. The Big Ten features three watch listers, although none come from quarterback-rich Ohio State.

“We’re very excited about the group of quarterbacks on our Watch List,” said Archie Manning, who along with his sons Peyton and Eli are the namesakes of the annual award. “And once the season gets rolling, I am sure we will see additional quarterbacks become worthy of inclusion as they establish themselves, so we will make some additions.” 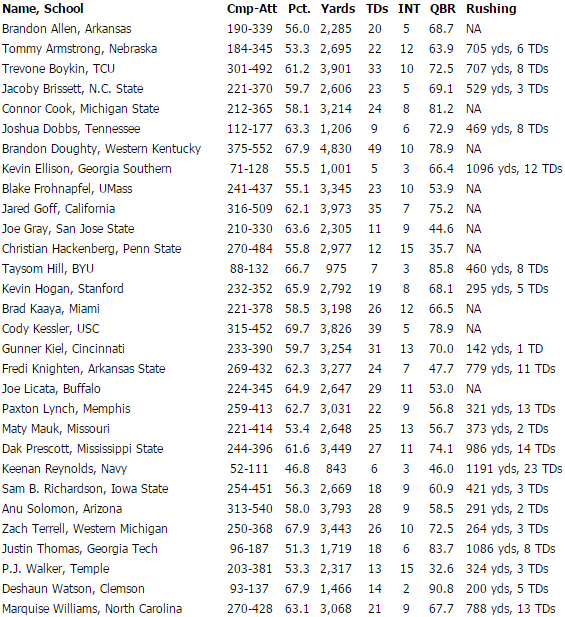