When last we checked in on Bovada.lv‘s odds for the 2016 Heisman, Leonard Fournette was a slight favorite over Deshaun Watson.  A month and a half later, not much has changed.

Bovada released its latest Heisman odds Wednesday, and, at 4/1, the LSU running back remains the favorite.  Those are slightly shorter odds than the 9/2 he was getting in late June.

Right behind Fournette are a pair of Heisman finalists from a year ago, Watson, the Clemson quarterback, and Stanford running back Christian McCaffrey at 9/2 and 11/2, respectively.  Watson was at 5/1 last go-’round, McCaffrey at the same 11/2.

No new players were added, although one was taken off the board — transferring Baylor quarterback Jarrett Stidham.  There was also very little movement for any of the 20 players, with one noteworthy exception as Texas Tech quarterback Patrick Mahomes has seen his odds shortened from 50/1 to 33/1.

Below is the full list of the latest 2016 Heisman Trophy odds, again courtesy of Bovada.lv: 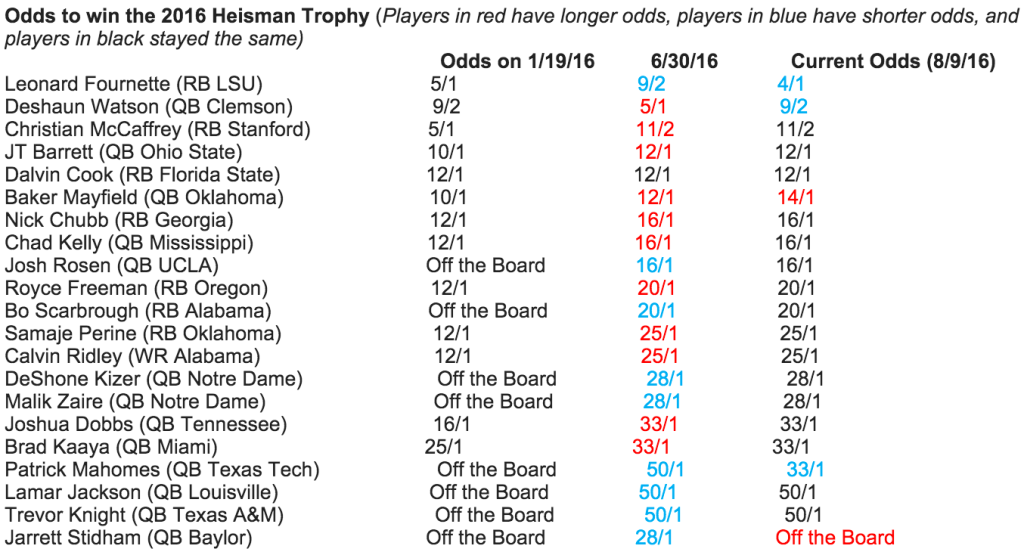