Well, that certainly didn’t long. At all.

Throughout the offseason and on into the start of summer camps, Sam Darnold has been Bovada.lv‘s prohibitive favorite to win the 2017 Heisman Trophy. Exactly one week ago, in fact, the USC QB was a 9/2 favorite; nobody else was closer than 7/1.

Following an uneven performance, to be kind, in Week 1 — he didn’t throw a touchdown and had two passes picked off against a MAC school at home — Bovada now has Darnold at 6/1.  That leaves the potential first pick of the 2018 NFL draft looking up at someone in this wagering race for the first time in a handful of months.

And the new favorite? Reigning Heisman winner Lamar Jackson. The Louisville quarterback, at 15/2 a week ago, is now at 4/1 after accounting for nearly 500 yards of offense (378 passing, 107 rushing) in a road win over Purdue. Behind Jackson and Darnold is Oklahoma quarterback Baker Mayfield, who held steady at 7-1.

Making the biggest move up is Josh Rosen. In UCLA’s historic come-from-behind win over Texas A&M, the junior completed 35-of-59 passes for a career-high 491 yards and four touchdown passes; he’s now at 8/1 compared to 25/1 a handful of days ago. Another significant jump was made by Oklahoma State’s Mason Rudolph, who went from 25/1 in late August to 9/1 in early September. 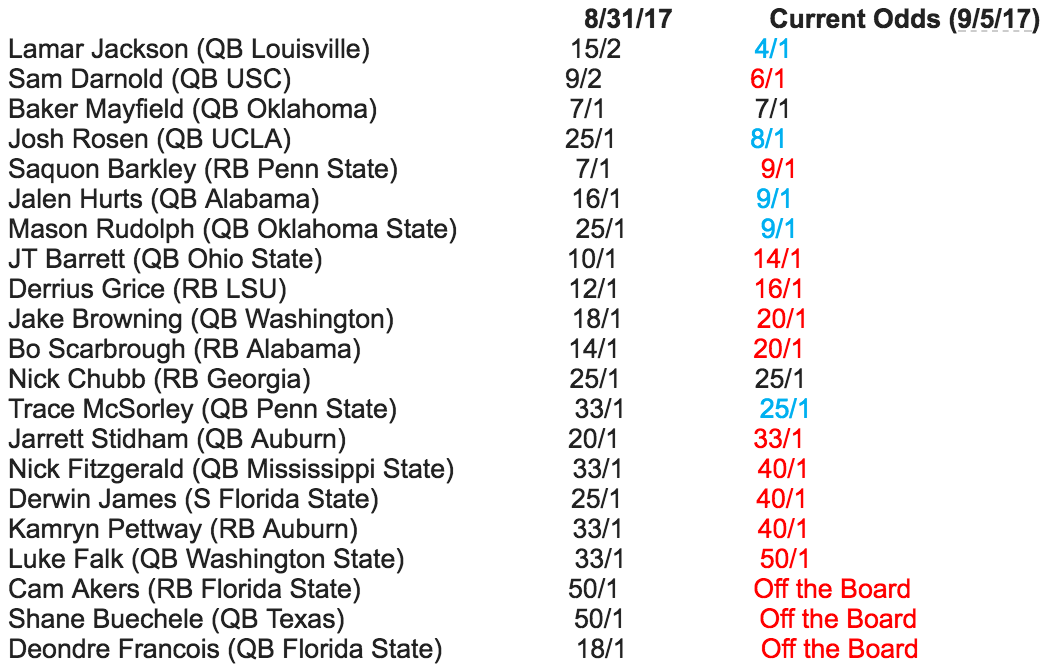