After two weeks of the 2017 season, Lamar Jackson is no longer the proverbial forgotten man.

The Louisville quarterback and reigning Heisman Trophy winner was seemingly an afterthought when it came to discussing the 2017 winner of the award this offseason, perhaps in part because just one player has won two and only a couple of players, including Herschel Walker and Tim Tebow, have even come close. With over 1,000 yards of offense and eight total touchdowns in the first two games of the season, Jackson’s back. Still.

Just last week, Jackson leapfrogged USC quarterback Sam Darnold ,the offseason-long front-runner, as Bovada.lv‘s Heisman favorite, with the former going from 15/2 in the preseason to 4/1 and the latter moving from 9/2 to 6/1. This week, Jackson is at 7/4 in Bovada‘s most recent odds while Darnold remains at 6/1. That does, though, leave Darnold behind Baker Mayfield as well, with the Oklahoma quarterback moving from 7/1 to 4/1 on the strength of his play in the huge road win over Ohio State.

The only other player with single-digit odds was Penn State RB Saquon Barkley at 9/1. 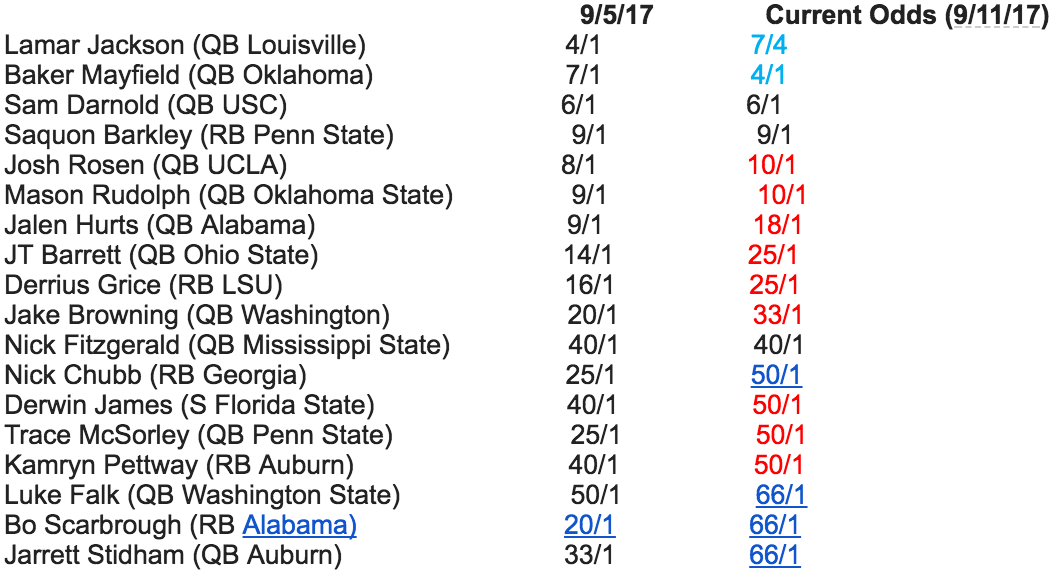